skip to main | skip to sidebar

a great video of the womens race in Koksijde:

a good reason for cyclocross!!!

intervals till your blue in the face, 300w!

5K in the pool, chlorine stench.

wasting 2 minutes trying to get on your bike....priceless 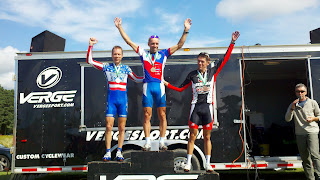 so yes...the blogging fell off the face of the planet for 2010 (at least pre-cross racing!).

SORRY! I don't know how you uber-bloggers keep up. For me I manage 3 kids, work, a wife...and a bit of riding/swimming/running.

The summer went by VERY quickly with lots of camps/coaching and a bit of racing. You know, that multi-sport stuff...I like my summers to be easy...you know, lazy days, etc.

But the leaves are changing and the sound of cowbells fill the air. It's time for cyclocross.

This year the New England races kicked off even earlier with Quad cross falling on 9/12 and the first VERGE races on the 18/19th of September.

This meant a solid specific prep phase started near mid July for me. I had some solid training weeks and knew the form was ok.

At Quad, I JUST missed the break with JONNY BOLD and Mark the Shark but rolled in for 3rd and my first podium of the year.

Fast forward 1 week to Catamount outdoor center for the first 2 VERGE races on the notoriously tough courses in Vermont. I made the drive Friday PM to avoid sitting in the car for 4.5 hours on Saturday. after some dinner and a few beers with Jason F. in Burlington, I was ready to rock Saturday.

The course was TOUGH with lots of uphill, grass climbing. I got a great start and slotted in behind Bold, Aspolm, Hines and Kraus. Then Matt had some bike problems and let a gap open to the 3 fast guys. I made a BIG effort at the end of lap 1 and used MANY "matches" to make contact...they promptly accelerated and I was off alone. I would roll around, suffering BADLY!, till the finish for 5th place. I knew the form was good, I was just a bit blocked and needed to implement the "details" to have a good Sunday.

Sunday I knew I was better. the sensations were good and the pace came easy in warm up.

I got another good start and slotted in with the usual suspects. The pace was strong but tolerable until Rog came through and turned the screws (Here). The final selection was made and it was me with Rog, Jonny, Kevin and Curtis. A lap later, Curtis would be gone...then, with 2 to go another hard push by Rog and we dispatched Jonny. Roger would pull a small gap on Kevin and I and jet away for the win. I let Kevin get a small gap on the last lap and I could not catch him back...so 3rd place and on the podium at a Verge race in the bag!

There is now a small break in the VERGE series races, but that doesnt mean there arent CX races in New England.

This past weekend was the "semi-classic" Suckerbrook CX in New Hampshire.

I had a tough week with Erika away for 4 days on a girls weekend, so my pre-race training was pretty spotty. I tried to get good sleep and eat ok (2 hotdogs for dinner the night before...yea baby!).

I arrived ~90 minutes pre-race and got a short lap on the course then proceeded to warm up well on the trainer.

I was able to squeeze a front row start place and timed the whistle well. Pete Smith and I got away clean and we slotted into a group with Rob Hult, my bikeman.com teammate Big Al and a few others. then, half way through the first lap I was remounting after the stairs and I kicked the rear brake cable out of the stop!!! shit! a quick NASCAR style stop and I was back racing again, in about 15th place. I chased HARD for 1 lap and quickly got back to the front. We made a selection a lap later and it was down to me, Rob and Curtis. On the last lap Curtis got caught in traffic and gapped off. I waited till right before the sand pit and I attacked Rob and got a gap...I was able to hold him off for the first win of the season! Of course I had to rush home to grab my kids...so no podium. 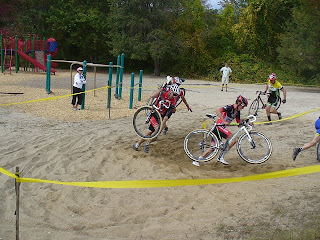 wow did I go MIA on this blog.

I guess being a dad, husband and coach takes a lot of time!

Here is the bullet point version:
-Cross Ended...not great, but good nonetheless (3 wins)
-The holidays came and I gained 12 pounds.
-The kids had a blast over the holiday period
-it snowed a bit
-i skied a bit...then it rained...and rained....and was warm.
-i raced 2 x Winter Tris (even though there were 4 on the schedule...see rain)
-Now I am getting ready for spring. Might start to ride my bike too.

Hope you had a great 3 months too!

www.pbmcoaching.com
Posted by Kurt P. at 9:48 AM 5 comments:

In my usual way I plan to keep these short as I need to get some work done before RI race weekend...and go train!

Sterling is traditionally the weekend after Thanksgiving and for 2009 became a 2 day event to fall in line with the other Verge series races.

Friday turned out to be a cold and rainy "black" day and I was forced to use my trainer for the first time this season to get my training in. After an hour of hard efforts I prepped the bikes with the Dugast Rhino's and tried to lay low for the rest of the day.

Saturday dawned brisk and WINDY!!! (40+mph) but the sun was out so I knew the chance for a dry track was good...I was right! No mud at all! And another great Tom Stevens design using the multi tiered course at Sterling.

I got a great jump on the whistle and lead the pack of nearly 75 riders around the cinder track to the run up. after the big run up the selection happened, JB, myself, Roger A and Kevin H. were all to the races. Roger and Johnny were making most of the pulls and I was sitting on. With 3 to go, I got gapped off a bit and had to bridge back on the track, when I made the connection I went to the front so I could lead into the technical sections. This sort of worked to slow down the better bike "drivers" then the attacks started. First Kevin, then Roger and finally Johnny. The elastic snapped and I was left in no mans land at 20sec back. I would finish there for another 4th place. I know on a good day I have the legs to ride with these guys, I just need to be better positioned and take more chances.

Sunday was a gorgeous day, the warmest I have ever raced at Sterling. No gloves warm! On Sunday I didn't get the same start and was swarmed but a half dozen guys in the first corner. Johnny immediately made a hard effort that would create the winning gap. Roger and Kevin chased hard but I got left behind. I slayed myself for 35+ minutes with the only help coming from Steve P. In hindsight this was a major error as I was just pulling around 5 guys who would go on to out sprint me for 4th. I was pretty pissed on the racing tactics of my other Elite Masters, but I eventually chalked it up to good racing on their part. 9th on the day.

I go into the final VERGE race weekend in RI 5th in points, 7 out of 4th. Hopefully the legs will be good and I race to my ability to wrap up the season.

Here is a pic from Day 1 in Sterling. 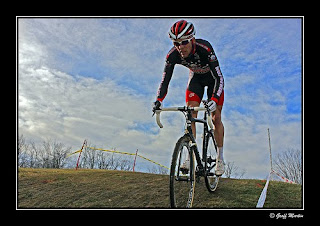 ...a lot of truth here in the Perham house.

I really enjoy this course! I had to miss it in 2008 as I was away at the OTC for some work functions. The course is super fun and the promoter added a few technical sections for this year including a series of steep 180 turns on the side hill along w/a double barrier at the bottom of the steep run up.

I lined up (ok pushed my way...) on the front row next to Bill Shattuck. Some of the usual VERGE suspects were racing as well, including Rob Hult and Mark G and John M from the 45+ A races. I got a good jump and followed Bill around the cinder track. When we hit the twisty's on lap 1, I punched it and got a good 5sec gap but knew I only had "ok" legs so I decided I would ease up, ride smooth and wait for the cavalry to arrive. Soon I was joined by elite racer Pete Smith, Bill S, and a few others. Bill, Pete and I did the lions share of the work and soon we had a gap over Rob Hult. We rode well together till 1 to go then I threw down a series of hard efforts to see where we all stood...I had a nice little gap up the steep riding section, then proceeded to almost dump it in the next corner...DOH! So it would come down to a sprint on the track. 2 Roadies v. me, the triathlete...great. I lead through the forest and onto the track, I waited a second or 2 then I nailed it. I knew if I stayed on the inside Bill and Pete would have to come around me. I never really "sprinted" per se, just pushed VERY hard on the pedals...with ~15 meters to the line, I saw Pete inching closer...but not in time! Win! I was pretty psyched as I feel I did most of the work in the group and led a large part of the race. Pete and Bill were impeded a bit by back markers for sure...but I took the chance to lead onto the finish strip, and it paid off.

Next up are 2 VERGE races in Sterling MA and then the VERGE finals in RI....then a little break!

Here are a few pics from the race, thanks to Nick6kcin for them! 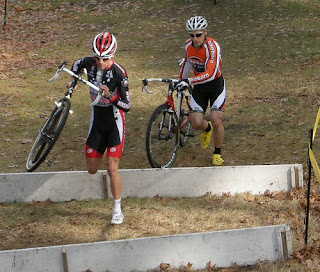 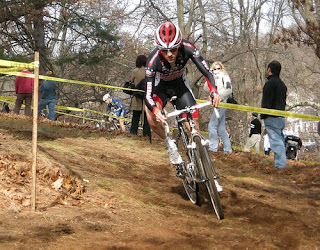